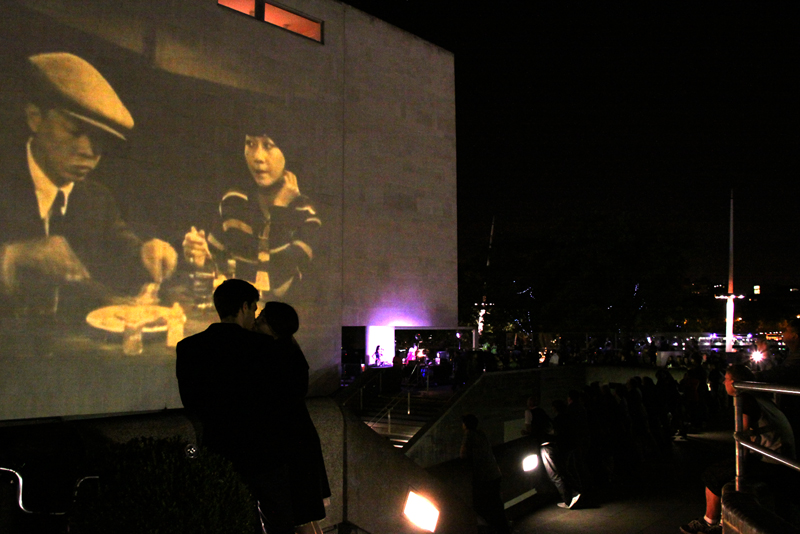 Using the classic silent film Piccadilly (1929) as the main platform, a new live soundtrack has been created by composers Ruth Chan and Suki Mok. Other mediums including contemporary video, narration, dance and theatre has also been entailed to enable audiences to rediscover Anna May Wong’s artistry and give voice to her silent screen persona.

Piccadilly Revisited has been performed at the Thames Festival in London, Royal Opera House, Hong Kong Arts Festival 2011, and most recently in Beijing as part of the UK Now Festival in Apr 2012. We are also planning to take the project to North America, Europe & Asia in 2013/14.

With freshly composed music, narration and video, up-and-coming composer Ruth Chan and director David Tse recreated, with a contemporary touch, the life behind the silver screen of Anna May Wong in Piccadilly Revisited. A century of dream through light and shadow (i.e. film), time seemed to have “blossomed” right on stage like the eternal flower of the orient.
Wen Wei Po (Full Chinese language review here)

With silent film, music and theatre, Piccadilly Revisited attempts to blend elements of modern theatre such as live vocals and narration with Anna May Wong’s most well-known film work Piccadilly, creating a most delicate alchemical effect weaving the past and the present.
CforCulture (Full Chinese language review here)

This year’s Hong Kong Arts Festival presented the “New Stage” series, featuring a production which brought the 1929 English silent film classic Piccadilly on stage with live music. The performing quality (texture) of Piccadilly Revisited was delightful – not only was the film enlivened by fresh editing, there was also an air of contemporary sensibility under the director’s artistic touch.
Ta Kung Pao (Full Chinese language review here)

“Congratulations on the success of Piccadilly Revisited! This is certainly a show with legs, and I look forward to conversations about Macau and other possible future destinations.”
Tisa Ho, Executive Director of HKAF

“The score is a shimmering, evocative and jazzy East-West brew”
The Times

“[Piccadilly is] bold, beautifully crafted… one of the truly great films of the silent era”
Martin Scorsese

It's all coming together for the Platinum Jubilee Pageant in June! #thehatchling

The music keeps on playing for @RuthChanMusic who co-wrote the piece, ‘LUST’ for @TheOperaStory production of ‘Beauty and the 7 Beasts’. The show opens at the @brixton_jamm tomorrow and runs the 14th April. Grab your tickets!

The whole team are brilliant, but am delighted I got a little mention from @TheStage
"Musically, there’s a surprising degree of consistency achieved. Highlights included the beautifully realised guitar accompaniment provided by Ruth Chan for Lust"
@TheOperaStory